Efficacy of biosecurity measures in the control of microorganisms associated to endometritis in sows. Preliminary study 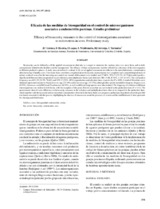 Biosecurity can be defined as all the applied measurements that take as a target to minimize the sanitary risks in a stock farm, and include measurements related to the facilities and the management. The efficacy of these measurements must be reflected in a decrease of the microorganism in different productive phases. A study was carried out to evaluate if the set of applied measurements influences the microbial uterine contamination after farrowing of healthy sows. Two swine farms were been completed about biosecurity measurements was completed and a microbiological study of uterine swabs of sows after the farrowing was carried out. A total of 60 animals were studied, and 27 (45%, 95% CI [33.3%, 56.7%]) resulted positive. Significant differences between production and selection and multiplication farms were detected (OR = 3.44, IC 95%, 1.135-11.047). The colonization frequency was 65% CI [51.3%, 78.6%] and 35% CI [21%, 49%] in production and selection farm, respectively (P = 0.02). A total of 66 isolates were obtained, represented mainly by Staphylococcus spp. (33.33%) and Aerococcus spp. (27.27%), although other species included in the genus Streptococcus (9.09%), Enterococcus (6.06%) and Pseudomonas (4.55%), as well as different fungi species were also isolated. The frequency of isolation of different microorganisms was similar in both farms, with the exception of the genus Enterococcus that was not isolated in the production farm (P = 0.01). The questionnaire showed some differences in biosecurity measures in the selection and multiplication farm when it is compared to the production farm, which together with the increased uterine microbial contamination observed in the latter leads us to propose a preliminary hypothesis about the possible risk factors associated with this process, highlighting the absence of measures to avoid the presence of vectors and the establishment of strict protocols for cleaning and disinfection