Integration of Bioinformatics to molecular research in forest species: the case of Holm oak (Quercus ilex) 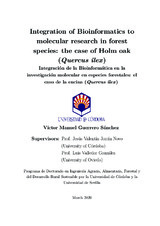