Coenzyme Q10 Supplementation for the Reduction of Oxidative Stress: Clinical Implications in the Treatment of Chronic Diseases 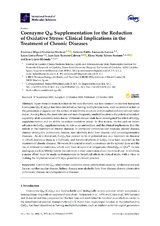 Apart from its main function in the mitochondria as a key element in electron transport, Coenzyme Q10 (CoQ10) has been described as having multiple functions, such as oxidant action in the generation of signals and the control of membrane structure and phospholipid and cellular redox status. Among these, the most relevant and most frequently studied function is the potent antioxidant capability of its coexistent redox forms. Different clinical trials have investigated the effect of CoQ10 supplementation and its ability to reduce oxidative stress. In this review, we focused on recent advances in CoQ10 supplementation, its role as an antioxidant, and the clinical implications that this entails in the treatment of chronic diseases, in particular cardiovascular diseases, kidney disease, chronic obstructive pulmonary disease, non-alcoholic fatty liver disease, and neurodegenerative diseases. As an antioxidant, CoQ10 has proved to be of potential use as a treatment in diseases in which oxidative stress is a hallmark, and beneficial effects of CoQ10 have been reported in the treatment of chronic diseases. However, it is crucial to reach a consensus on the optimal dose and the use of different formulations, which vary from ubiquinol or ubiquinone Ubisol-Q10 or Qter®, to new analogues such as MitoQ, before we can draw a clear conclusion about its clinical use. In addition, a major effort must be made to demonstrate its beneficial effects in clinical trials, with a view to making the implementation of CoQ10 possible in clinical practice.