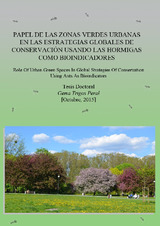 Taken into account the role ants can play as bioindicators, we carried out a 10-year study in 9 different urban parks in Córdoba (Andalusia, Spain), in order to find out how habitat features affect the abundance and species richness of ants on small and large scales. Starting with a faunal study of the myrmecofauna present in each of the parks used in the study (using pitfall traps, as main method, as well as Berlese and direct search), an analysis was carried out to know the influence of the age and the distance from natural and seminatural areas on the biodiversity in urban gardens. Also, 16 different features present in the surrounding microhabitat of the pitfall traps (such as presence of tree or shrubs, stones and leaf litter…) were analysed in order to establish a relationship between these variables and the species of ants found in each pitfall trap taking into account the effect of the invasive ant Linepithema humile on the other species. Once the relationship with the microhabitat was known, the effect of the climate features as determining factors of the myrmecofauna occurring in urban parks was also studied, taking chance to use the weather station installed on the Campus of Rabanales. Finally, the effect of the features of macrohabitat, such as canopy cover and humidity, on the ant community were assessed. As expected, due to the specificity of this bioindicator group, the biodiversity of ants present in urban gardens is totally dependent on microhabitat and climate features, as well as is dependent on the age an location of the park, even in damped ecosystems such as urban parks, whereas the effect of the macrohabitat is almost imperceptible.