Pshycological dating violence in young couples. Relation with other types of violence and quality of relationships 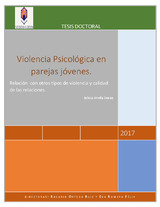