The adverb in the New Testament. A classification from a semantic point of view 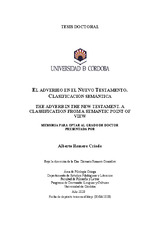 The aim of this PhD thesis, The adverb in the New Testament. Classification from a semantic point of view, will be, on the one hand, to show a study of this grammatical category from a new semantic perspective and, on the other, to carry out a semantic classification. This dissertation forms part of the research project DGENT (Diccionario Griego-Español del Nuevo Testamento), which is written by GASCO (Grupo de Analisis Semantico de Cordoba/Group of Semantic Analysis of the University of Cordoba). The group employs a semantic methodology developed by Profs. Juan Mateos and Jesús Peláez. Thus, using the previous methodology, we propose the following PhD composed by six chapters: – Chapter I shows a brief history of the adverb, which includes questions about when and how the adverb arises, the problems of its study in the Greek language and its recognition by different philosophers and grammars, both Greek and Latin. Thus, this history will be based on the analysis of Greek and Latin texts where an answer is found to where the adverb comes from, how and when it arises, who the first author to recognize it as a grammatical figure was and, finally, with what characteristics the adverb is presented in the Greek and Latin language. – Chapter II basically develops Nida's method for the semantic analysis of lexemes, based on structuralist semantics, from which our method is derived. Nida is the first author to apply the differentiation between grammatical (noun, verb, preposition, adverb and conjunction) and semantic species (Entity [E], Event [H] and Attribute [A]) in order to study the New Testament lexicon. This division is decisive for a semantic analysis of any grammatical species, and, in our case, of the adverb. The bases of Nida's methodology are set out in his Greek-English Lexicon of the New Testament Based on Semantic Domains, which was compiled together with Louw. They do not only explain their theory of semantic species in this work, but also put it into practice by dividing all the New Testament lexemes into ninety-three semantic fields, which are in turn distributed among these semantic species. Once Nida's methodology has been explained and its application to the study of the adverb has been tested, we will see that, due to the wide range of characteristics of the semantic species created by Nida, it does not allow an exhaustive study of the grammatical figure that we are dealing with here. It is necessary to develop and extend these semantic categories, which was accomplished by Mateos (Método de análisis semántico aplicado al griego del Nuevo Testamento) and developed by Pelaez (Metodología del Diccionario Griego-Español del Nuevo Testamento). Therefore, in this same chapter we study the method of semantic analysis used in the writing of the DGENT. The latter method, a direct descendant of the one developed by Nida, complements and improves it by adding to the semantic species two new ones, Relation (R) and Determination (D). Together with the addition of these species, Mateos configured the graphic representation of the meaning of the lexemes. To do so, he created a semantic formula, which contains the denoted semantic species and the connoted one alongside the necessary relations to complete the meaning and those presented with the context. He also added a semantic development, which shows a list of specific and differential semas that allow us to understand the semantic characteristics of each of the adverbs and their inclusion in different groups. – Chapters III and IV show the application of the method and methodology to each of the adverbial lexemes of the New Testament corpus and the grouping of all of them in the two semantic species, Relation and Determination, in which this grammatical category can be classified. They constitute, therefore, the central part of our work. – Chapter V gathers the grammatical information that currently exists on the adverb in the Greek language and is complemented by that obtained from the semantic classification of adverbs. Thus, a specific grammar of the adverb in this closed corpus is obtained, taking into account its morphological, syntactic and semantic characteristics. – Chapter VI presents the results obtained from this research, ending it with an appendix, where the complete study on the morphological origin of the adverbs present in the New Testament corpus is included.