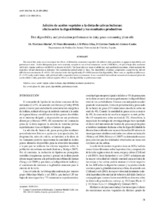 The aim of this study was to investigate the effects of differently unsaturated vegetable oils added to dairy goat diets on apparent digestibility and performance traits. Twelve Malagueña goats were randomly assigned to one of four treatments: no oil (CONTROL), 48 g/d of high oleic sunflower oil (GAO), regular sunflower oil (RSFO) or linseed oil (LIN). The basal diet was made of alfalfa hay and a pelleted concentrate, which included the respective oil and chromium as indicator. The experimental period lasted 21 days. The digestibility of dietary components, except for fat, did not differ between treatments (P > 0.05). Oil inclusion in the diet significantly (P < 0.05) increased fat digestibility. There were no significant differences (P > 0.05) in dry matter intake, milk yield and milk composition between treatments. It was concluded that moderate amounts of unsaturated plant oils can be added to dairy goat diets without negative effects on diet digestibility or performance traits.