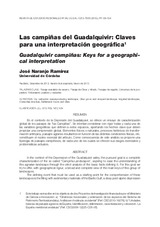 En el contexto de la Depresión del Guadalquivir, se ofrece un ensayo de caracterización global de los paisajes de “las Campiñas”. Se intentan considerar con rigor todas y cada una de las variables geográfi cas que defi nen a estos espacios, aportando los hechos clave que deben propiciar una comprensión global. Elementos físicos o naturales, procesos históricos de transformación antrópica, paisajes agrarios resultantes en función de las distintas condiciones físicas, etc. constituyen el núcleo esencial del artículo. Como consecuencia de este análisis se propone una tipología de paisajes campiñeses, de cada uno de los cuales se ofrecen sus rasgos esenciales y problemáticas actuales.In the context of the Depression of the Guadalquivir valley, the pursued goal is a complete characterization of the so called “Campiña Landscapes”, aspiring to ease the understanding of this agrarian landscape through the strict analysis of the basic facts defi ning it. For this goal we try to offer, with geographical rigour, a broad and complete view of the main keys of this group of landscapes. The defining event that must be used as a starting point for the comprehension of these landscapes is the fi lling with sedimentary materials of the Baetic Gulf, a deep post-alpine depression located between the Spanish Plateau and the Baetic Mountains. Taken by the sea, it became a big sedimentary storehouse that, with the rising of the seabed due to residue accumulation, fi nally expelled the sea to the West. The leading role in this aspect belongs to Miocene materials (Tertiary Period), but also with the participation of later groups, both Tertiary and Quaternary. Frequently considered monotonous and little attractive in comparison with mountain landscapes, we try to prove the richness they have and the enormous internal variety they contain, enumerating and analysing the elements that, from a geographical perspective, defi ne the different varieties and demonstrable situations. The first aspect to describe is the basic physical features of the territory, being its main argument the Tertiary-Quaternary sedimentation, whose rich soil developed some of the most fertile agricultural landscapes in the Iberian Peninsula. The primary and elemental general characterization of the Campiña landscape is completed with an approximation to the internal varieties hidden and contained behind that global vision. This variety can be provoked due to different factors, among them: Proximity to important waterways affecting landscape’s own dynamics. More or less resistance to erosion of the different strata constituting the Miocene-Pliocene. Physical proximity from the Baetic Mountains and temporal proximity of the sedimentation in relation to the alpine paroxysm. The result is the identifi cation of two big subgroups, the “Upper Campiñas” and the “Lower Campiñas” and, at the same time, related with them and with its own personality, there are two different plain landscapes, the one matching the big waterways terraces and the one existing in some interior areas which has, as a defi ning element, a quaternary cover which fossilizes and upholsters the tertiary sedimentary materials. The basic outline for the resulting landscapes is the following: * Campiña landscape: - “Upper Campiñas”. - “Lower Campiñas”. * Terraces landscape in the banks of important waterways. * Hinterland plains landscapes. From each of these landscape groups it is studied and considered their physical features, the evolution of their relief shapes, their soil composition and their adaptation to the different kinds of crops in order to, as a fi nal result, defi ne the current landscape. But we cannot forget that we are making reference to landscapes with a deep historical tradition, and because of that it is impossible to understand the current situation if we do not previously offer a diachronic perspective of the evolution of the natural elements present in the territory, of its conversion and agricultural uses and of the cropping patterns applied in the past. For that goal, in each particular case the most important landmarks in relation to ownership regime and land management systems are considered, being both of them circumstances that explain and justify the current situation. As regarding both the diachronic view of the landscape and its current situation, we are interested not only in terms of cropping and uses –vegetal element of the landscape–, but also in other essential elements in that landscape: settlement, ownership structure, division of land, etc. The interest and opportunity of this summary attempt about the agricultural landscapes in the Campiñas is based not only in giving the keys for its global understanding, but also in the fact that, behind the material signs of this landscape there are other issues and questions as important and discussed as the Andalusian distribution of land in large agricultural estates –latifundismo–, its evolution and current situation, the social groups with leading roles in this agricultural history, the traditional and present agricultural entrepreneur, peasant movements and the fi ght for land ownership, etc. The following main ideas summarize the study: a) The Campiñas are seen today as a natural and human varied environment, creating a new mosaic of landscapes full of nuances and meanings which overcome a single perspective. b) The dull traditional view does not surmount a detailed analysis of the ecological elements present in the territory, which express a signifi cant variety of landscapes. c) This landscape mosaic has been emphasized due to the recent human pressure, especially during the last third of the 20th century. d) As a kind of palimpsest, the Baetic landscape, its fertile plains and Campiñas, is offered nowadays as a dynamic, varied and strategic environment, due to its central location in the regional context.