A contrastive study of the semantics of English and Spanish prepositions: A cognitive linguistic perspective 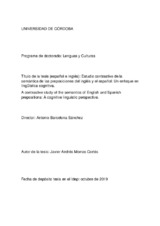