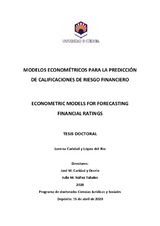 Credit Rating Agencies (CRA) provide ordinal assessments associated with the ability of companies, governments, institutions or financial assets, to meet debt obligations on time. These ratings are generated by CRAs as an 'objective' information about the financial health of their customers (although, in some cases, the CRAs provide ratings for third parties), bonds emissions, companies, institutions, and some other agents or financial products. This information is based on two components: the first is estimated from financial and economic sources, usually public, and the second on so called ‘qualitative’ data, which is part of the proprietary know-how of the agencies. But, how an independent investor or institution could evaluate the financial health of a company or a new issue? How can it be done without having to incur in the costs of arranging a contract for this purpose with a CRA? Some statistical methods have been employed with this aim, but as the emergency of Artificial Intelligence (AI) tools are becoming widespread, it is possible to model the rating of a company using public data. In fact, this is possible using public information, available to investors and to financial institutions. The answer to these questions lies in using statistical multivariate methods and AI models to estimate ratings of companies based on information available about their financial and economic data. Most of the literature about financial rating forecasting focuses on bond-rating prediction, and not in company’s ratings. The specification of econometric models to forecast the credit rating of a company involves using exogenous financial variables that produce a causal effect on their creditworthiness, and on their capacity to fulfill their future obligations. Public data are available for most of the companies that are traded on financial markets. In Bloomberg's database, this information and the ratings obtained from the main CRAs, are available. Long-term rates are divided in two main categories: investment and non-investment grades using a letter scale. Investment grades starts (in Moody’s scale) at ‘Aaa’, wich is related to the highest credit quality, and, consequently, the lowest expectation of default risk; they reflect and exceptionally strong capacity to fulfil their financial commitments, and they are not future events that can alter this situation; the ‘Aa’ rating is linked to very high credit quality, and low default risk. Following it is the ‘A’ level, associated to high credit quality and low possibility of default, but can be influenced by changes in the business environment. Finally, the ‘Baa’ level is associated with medium risk. The junk grade level starts at ‘Ba’ and ‘B’, which is associated to high risk of default, the ‘Caa’ and ‘Ca’ to highest risks, and finally, level ‘C’ is associated to firms in default, that is, with the presence of credit events of failure to pay interest or principal of a loan or security when due, and the debtor is unable to meet the legal obligation to debt repayment. The information provided by these values is ordinal, and not directly associated with probabilities of default. Moreover, more troubling is that the risk increase linked to a notch downgrade is not constant along the scale; more still, these variations are not comparable between them, and still less, they cannot be quantified. Some Multivariate Analysis methods used to estimate rates produce less accurate classifications; for example, Discriminant Analysis reaches only 20.7% of correct forecasted ratings, but only 16.7% when using jackknife methods to exclude one case at the time, as trial set. Multivariate logit (or similar models) are in the same range. While non-linear methods, such as Artificial Neural Networks, provide much better results, if a sufficiently large sample is used to train the model. The first main objective proposed is to elaborate models that can reproduce S&P's and Moody’s long-term ratings using publicity available data. The second main objective is to analyze the phenomenon called 'rate inflation', that is, the attribution of a certain level of rating above the 'objective level' which would be generate by an impartial observer. As Moody's ratings tend to be lower that those obtained by S&P's, these differences are considered as an evidence of rating inflation. This has been studied, also, in different economic sectors. Data employed come from two random samples of over one thousand companies each, for the years 2010 to 2018, and from thirteen economic sectors